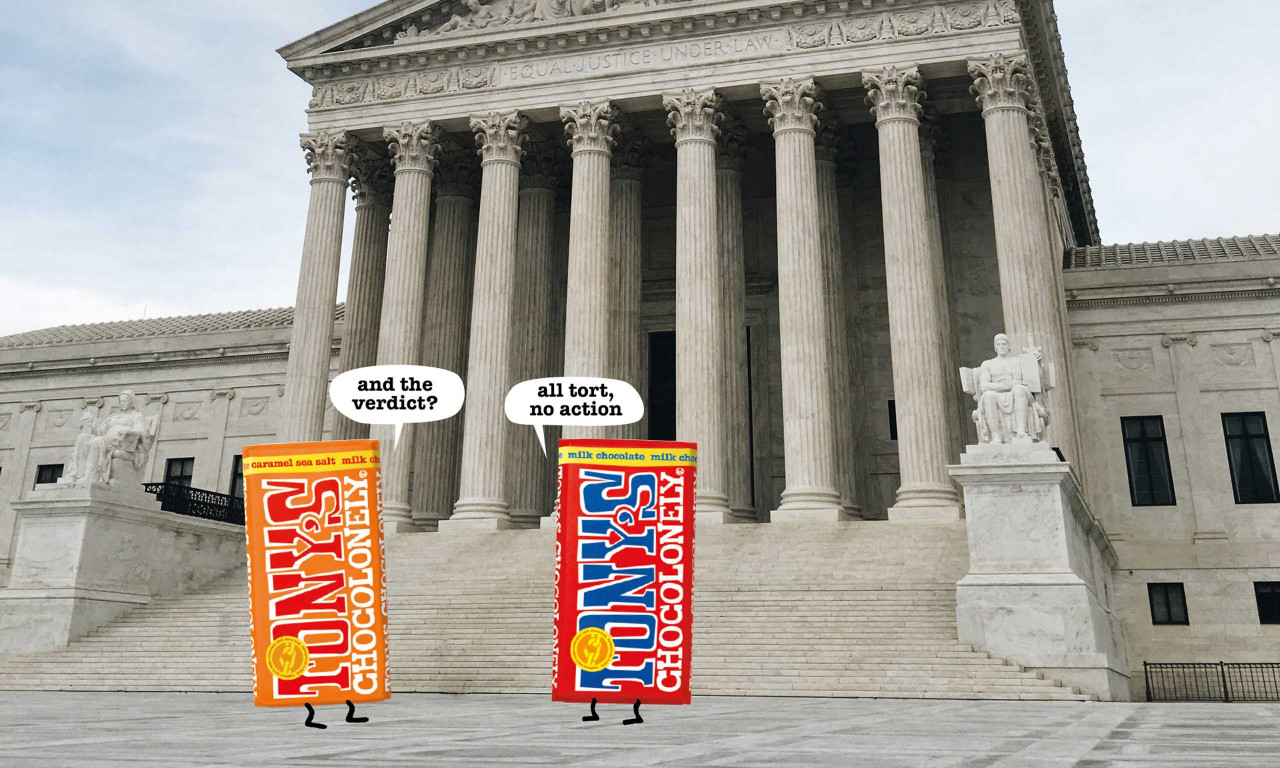 In the landmark case of Big Choco vs the victims of illegal child labor and modern slavery, the verdict is in. After 15 years of legal proceedings, the Supreme Court has upheld corporate interests over human rights. Are we surprised? Not really. Are we discouraged? Not a chance. Here’s why..

But first, a recap
Remember last November when we covered this Supreme Court case about human rights violations in the cocoa industry? Here’s a quick refresher:

In 2005, 6 Malian men filed a lawsuit against Nestlé and Cargill. The men were trafficked as children and forced to work on cocoa farms in Ivory Coast. They alleged that the 2 companies “aided and abetted” violations of international and US law in the way they sourced their cocoa. Big Choco disagreed saying they couldn’t be held responsible for something that happened so far away. The case bounced around the courts for 15 years, finally appearing before the Supreme Court on December 1st, 2020. We submitted an ‘amicus curiae brief’ in support of the Malian’s case.

The verdict
On June 17th, 2021, the court sided with the chocolate companies. But the reason is a lot more complex than simply absolving them of wrongdoing. Rather, it hinges on the invalidity of the prosecution’s case, which was built around an obscure old law from 1789 called the Alien Tort Statute (ATS). The ATS allows U.S. courts to decide whether forced labor violates international law even if the forced labor took place outside the United States. But the justice ruled against the arguments, because it could not be proved that the decisions that led to the violations happened on U.S. soil.

A glimmer of hope
Although it’s horrific that the plaintiffs did not see the justice they deserved, there may be a slim silver lining. In the opinions of the Court, the Justices hinted that although this was not a statement of support for the Malians, it was a clear statement of who has jurisdiction over the issue. And makes clear that the best hope of justice is through the enactment of meaningful and effective human rights due diligence legislation.

Justice must still be served
Over 30,000 victims of modern slavery and more than 1,56 million children are still working illegally in the cocoa supply chain in Ghana and Ivory Coast. If we want this to change, we need to stop with voluntary efforts and empty promises. We need binding, global legislation to hold companies accountable.

On the east side of the pond we’ve been banging the due diligence legislation drum for some time. Right this minute we’re asking the EU Commission to pass Human Rights and Environmental Due Diligence legislation (HREDD – our favorite mouthful, second only to milk chocolate, caramel and sea salt). Backed by 66,099 Choco Fans who signed our petition demanding corporate accountability and human rights due diligence are laid down as law. Meanwhile, back in the States, we’re calling on Congress to enact HREDD without delay!

Everyone has a role to play
As an impact company, we think it’s important to weigh in on a case like this. And we think all businesses have a role to play in standing up for social justice. Not only that – we need businesses to be good faith implementers of the law, and keep one another accountable, in the name of upholding human rights. Governments must also become good faith regulators by introducing HREDD legislation to hold corporations to account. And of course, Choco Fans. Share our chocolate, share our story, and support us on our journey to making 100% slave free the norm through due diligence legislation. Are you in? Become a Serious Friend to be first with mission updates and our latest choco news.