Chocolate for democracy in Georgia

By now, you probably know that at Tony's, we believe in making your voice heard. In fact, it's even one of our core values: outspoken! And like we said during the 2020 election cycle, the most important time to make your voice heard is when it has a chance to change the world for the better. And that’s exactly what brought us to Georgia in early January of 2021.

What's going on in Georgia?

All eyes are on Georgia this January, and we’ve heard from Georgians themselves, it can feel kinda weird. The reason is that Georgia has one election yet to be held, and two open seats to fill. Two positions may not sound like a lot, but these hold the key to the balance of power in the senate, so it’s pretty important.

Why did Tony’s get involved with the Georgia senate runoffs?

Well, we’ve got a history with helping in elections, you see. Since there was so much at stake in the 2020 elections, we decided to encourage our fans, and people all over the country, to make change by making their voices heard. So, we teamed up with non-profit, non-partisan voting organization, HeadCount, to register voters, share important information, and encourage people to get out there and vote.

Together, HeadCount and Tony’s ran digital campaigns, and even travelled the East Coast to get out the vote. Not to mention that we joined hands with lots of other partners to make sure we made an impact. We made limited edition vote bars with our friends at Favored Nations, we fed the polls with World Central Kitchen, we pledged to give Team Tony’s paid time off to vote with Time to Vote and so much more. So, you could say we were pretty proud of our efforts to help in the 2020 elections.

Then, we heard about Georgia. After all we’d accomplished during the national elections and how good we felt about lending our hands, we knew that participating in the Georgia Senate races was the right thing to do. But we didn’t just want to spread the word, because we knew that showing up for the community was important too. So, our team hopped in the Chocotruck and set sights on Georgia.

What did you do to help with the elections in Georgia?

To really make a difference with something as big, important and complicated as an election, you really need to know your stuff. That’s why we teamed up once again with our friends at HeadCount to answer some serious questions about voting and get folks to the polls. One of the things that inspired us most about working with HeadCount in Georgia was watching them create avenues to voting for people who otherwise wouldn’t have had the resources to make that happen. That’s what we call making some real impact.

We also wanted to raise awareness and get people out and voting. So, we partnered with one of the biggest names in all of Georgia: Jeezy. Jeezy isn’t just well known, but he’s well known for being political and making his voice heard. Together, we were confident that we could turn out the vote. So, we wrapped some of our classic bars in a special Jeezy edition vote wrapper and shared them out to spread the word. We also shared our chocolate (yep, including those special vote bars) and our story with visitors at the drive-in concert experience Celebrate Georgia! where Jeezy made an appearance, and at polling locations with some very special Jeezy snowmen.

To make a connection with voters in Georgia state, we also knew that getting involved with local partners was a must. We started with attending two #chalkoutthevote events created by Civic Georgia, Taskforce PR and our friends at HeadCount. There, we shared chocolate, JUST water, and even HeadCount x American Eagle vote t-shirts. Who wouldn’t wanna come by and make their voice heard, right?

But we didn’t stop there, we also partnered with the New Georgia Project, When We All Vote and Live Nation during the Celebrate Georgia! Event. We were extra happy with that partnership, because we’re so inspired by the work the New Georgia Project has done, you don't get much closer to the heart of democracy in Georgia than that. Lastly, we dropped by lots of polling locations around the Atlanta area to drop off chocolate and water to feed the polls along with our friends at World Central Kitchen and Georgia STAND-UP.

All in all, it was a whole lot of work, but we’re proud of it. Just like we’re proud of what we’re doing to change the chocolate industry, we’re proud to be activists in the communities we call home too. What a way to start the year! 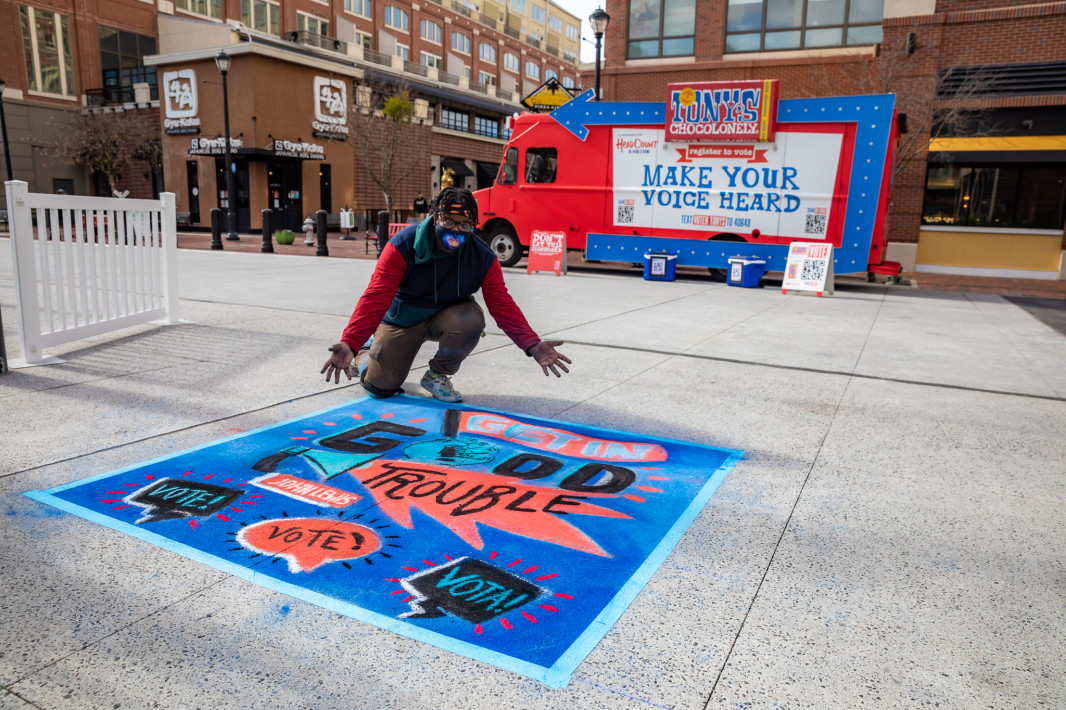