Your browser seems to be quite old. Please consider updating your browser to use this site.

We’re often asked, “Does your impact strategy ever clash with your commercial strategy?” Well, no, actually, because we only have a single strategy: our roadmap. And it’s all about making impact. This results in a huge amount of commitment and provides a lot of clarity. In fact, we really recommend it to every company.

Our roadmap consists of three pillars: 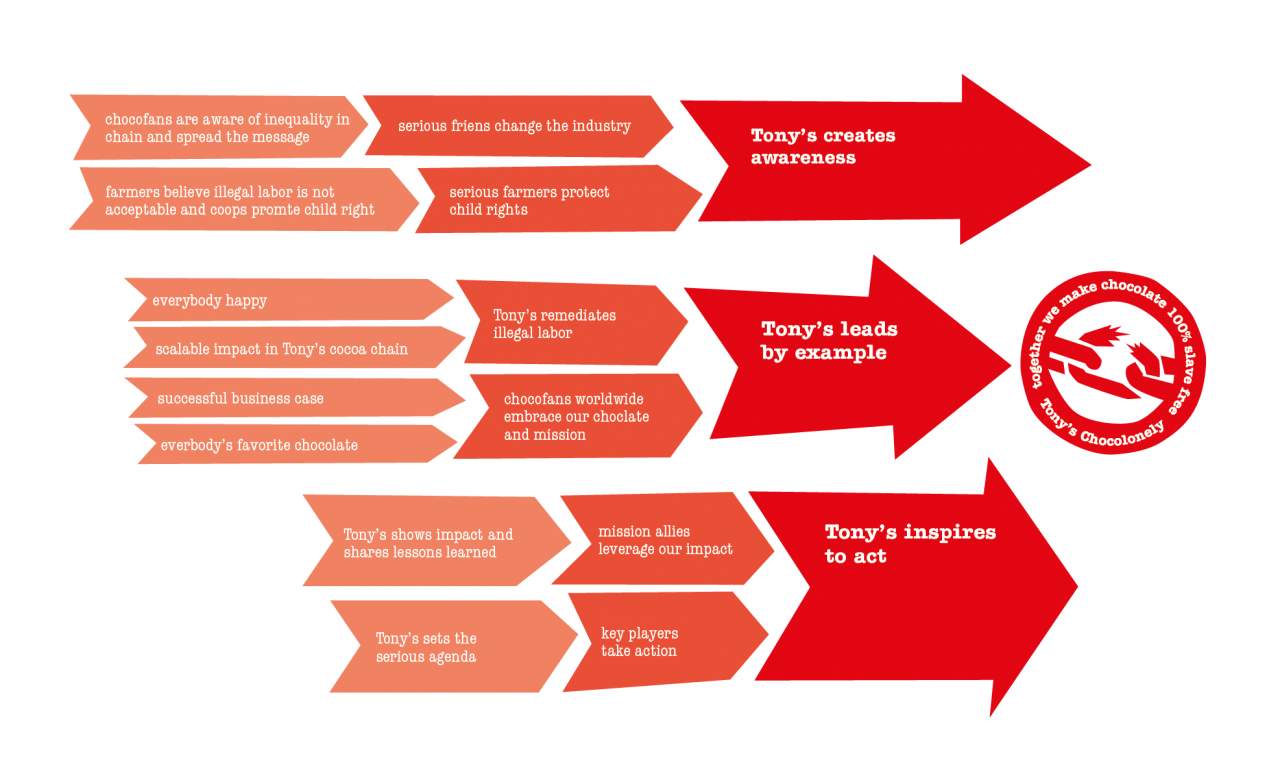 By now, 67% of choco friends knows about the existence of slavery on the cocoa plantations in West Africa. This was 63% a year ago. That’s a pretty neat improvement!

We want to build close relationships with choco friends who feel particularly committed to Tony’s mission and want to actively work on changing the industry. That’s why, since September 2017, we’ve been building true friendships. Most recently we counted 8,569 Serious Friends.

Currently, 3,072 farmers take part in CLMRS, the Child Labour Monitoring and Remediation System. Community facilitators make partner farmers aware of what children are and are not allowed to do on a farm. So far, members of our partner cooperatives have participated in 936 sessions focusing on children’s rights.

Over the past year, 100% of the cocoa beans we purchased through our partners were traceable. They were produced by 5,021 farmers , all members of the five cooperatives. In total we bought 7106 metric ton (mt) cocoa beans.

We track child labour using the Child Labour Monitoring & Remediation System (CLMRS). Since the start of the CLRMS, we have found 268 cases of child labour.

Our annual market growth has shown that an impact company can definitely be successful. Over the past year, we actually became the market leader in the Netherlands, with a 19.03% market share (Nielsen).

Now that we’re the market leader chocolate bars in the Netherlands and able to show that we’re making more and more impact, we’re really going for that third pillar. We’ve got a successful example for the second pillar, but with Big Choco we can change the entire industry. After all, they’re the right size to achieve this. . We have not yet persuaded a large player in the industry to copy our rules of the game. We can see that interest is on the rise, but on October 1, 2018, we’d not seen any white smoke yet, so there’s a sad lack of any figures reviewed by PwC.

The five principles of cooperation: our five rules for 100% slave free chocolate

To change an industry’s working methods, you first have to take a closer look at the rules of the game. To put it quite simply: they have to change. We’ve drawn up five rules for the chocolate industry and governments: our five sourcing principles. They need to be implemented all five, otherwise you are cheating and the system doesn’t change.