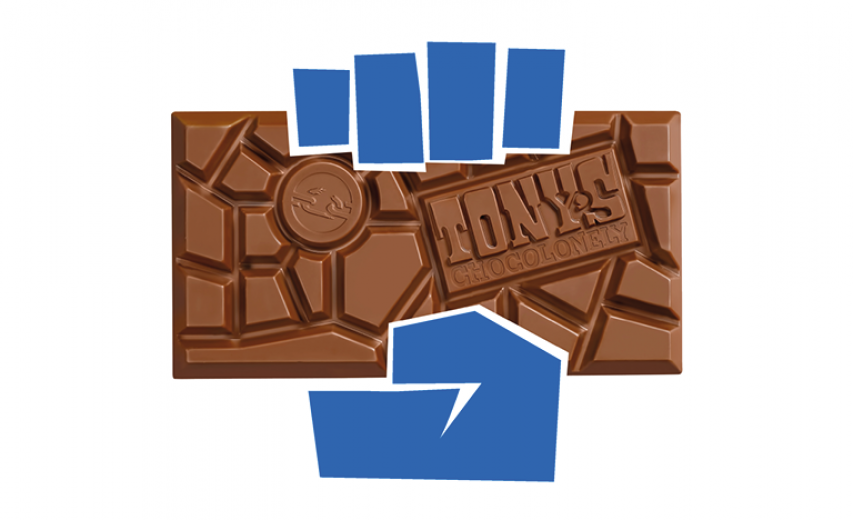 When you buy cheap chocolate, you might think you’re getting a pretty sweet deal – but chocolate discounts come with bitter notes of child labor with a side of modern slavery wrapped up in every bite.

There’s no such thing as a free lunch, let alone free chocolate

The math is simple: the price you don’t pay for chocolate doesn’t vanish into thin air. It comes at the expense of the farmers who cultivate the cocoa used in the production of cheap chocolate bars. To make this more tangible, let’s crunch some numbers for the world’s biggest cocoa-growing countries:

In Ghana and Côte d’Ivoire, the living income is set at $2.16 and $2.49 per person per day, respectively. As a result of the excessively low prices Big Choco is currently paying for cocoa, Cocoa Barometer estimates that cocoa farmers in these countries only earn an average of $0.78 per day. Which explains why so many people are still living in poverty.

As a direct result, the Global Slavery Index estimates at least 30,000 victims of modern slavery and 1.56 million children employed in child labor in cocoa Ghana and Côte d’Ivoire alone. Those numbers speak for themselves.

Why we do what we do

We can’t stress enough Tony’s is an impact company that makes chocolate, not the other way around. We encourage you to read our impact story to get to the core of why we do what we do. It all started waaay back in 2003 with a Dutch investigative journalist called Teun van de Keuken and a Dutch TV program called Keuringdienst van Waarde.

While looking into what goes on behind the scenes in the choco industry for an upcoming episode, Teun and his team discovered that human rights infringements - like modern slavery and illegal child labor - were by no means an exception. Even worse. Some even went as far as to call them the norm.

In a bid to expose these bitter truths, they collected large chunks of evidence and documented the horrors of cheap chocolate. Teun then famously filmed himself eating a bar of chocolate and took himself to court. His claim? As a consumer of cheap chocolate, he was complicit in the industry’s failures.

In the end, the judge dismissed his case stating Teun couldn’t be legally prosecuted on these grounds. Buut more importantly, his point had been made. And it had been made public. More determined than ever, Teun wrapped a bunch of fairtrade ingredients and practices in bright red packaging (yeah, we’ve always been flashy that way) and founded Tony’s Chocolonely. Our very 1st batch of choco bars flew off the shelves faster than you can say ‘eat me’. The rest is history.

Though Teun sold Tony’s to Henk-Jan in 2011, his legacy still lives on to this day. As a global impact brand and sustainability frontrunner, Tony’s Chocolonely continues to fight to put an end to cheap chocolate. Our 2021 impact highlights at a glance:

Making 100% slave free the norm in chocolate, together!

At Tony’s, we’re guided by the mission of making 100% slave free the norm in chocolate. And we believe that the only way to do it, is to do it together. That means chocolate companies, cocoa farmers, governments, retail and Choco Fans all need to join forces to change things for good. This means no more cheap chocolate gifts, no more chocolate discounts, no more bitter truths.

In an effort to get the ball rolling, we developed Tony’s Open Chain – an open-source, industry-led initiative that helps choco brands transform their supply chains and become sustainability frontrunners. Our 5 Sourcing Principles are an integrated approach to doing business by:

We’re proud that Albert Heijn, Jokolade, Vly and Aldi have already joined us as Mission Allies so we can make the cocoa industry 100% slave free, together. And we invite all choco brands, big and small, to collaborate with us on cocoa moving forward.

So next time you’re thinking of chomping down on those chocolate discounts, take a step back and ask yourself – are you willing to let farmers pay the price? And if your answer is ‘heck no’, choose change by purchasing your choc from Tony’s (or one of our Mission Allies) instead.

As mentioned in our 5 Sourcing Principles, at Tony’s, we go beyond certification and take fair pricing for our cocoa beans (aka fair pay for cocoa farmers) to the next level. In a cocoa shell, our pricing effectively looks something like this: 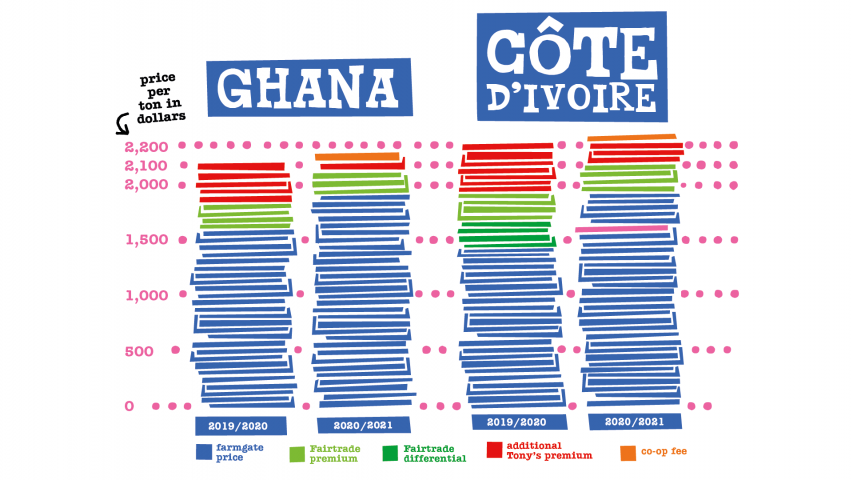 A couple of years back, we sat down with Fairtrade and used industry research to create a model for calculating a price for cocoa that enables farmers to earn at least a living income. This is what we call the Living Income Reference Price, or LIRP. The LIRP factors in a range of things, like the average family size, cost of living, business costs, viable farm size, productivity targets and income from other activities.

In Ghana, the LIRP is currently set at $2.16 per person, while for Ivorians it’s $2.49. With recent estimates showing that Ivorian farmers earn an average of $0.78 per day, the gap is substantial. So, we bridge that gap with an additional premium.

As you can see (up top), we take the farmgate price (which is the minimum price governments set for their cocoa), add the Fairtrade premium, add the Fairtrade differential and then add the additional Tony’s premium and co-op fee. And since the farmgate price changes several times a year, the additional Tony’s premium is flexible. If the price drops - like it did by a whopping 18.5% in October 2021 - we take a bigger chunk of our profit and funnel it into paying our farmers a higher premium. That’s how we make sure our partners earn at least a living income. That’s how we’re changing the industry from within, 1 bean, 1 bite, 1 bar at a time.

So there you have it. All those facts and figures stack up to be a whole loaaad of impact! Join Tony’s in ridding the industry of cheap chocolate and help make the world a fairer place for all.