Tony's Chocolonely's Sweet Solution look-alike bars are back for good

Tony’s Chocolonely, an international chocolate company, announced the return of their popular Sweet Solution chocolate bars, which aim to raise awareness about the widely prevalent illegal child labor in the cocoa industry

NEW YORK, NY, June 1, 2021 – Today, Tony’s Chocolonely, a B-Corp and Fairtrade certified company on a mission to make all chocolate 100 percent slave free, announced that their fan-favorite Sweet Solution bars, which aim to expose the bitter truth in the chocolate industry, are officially back for good nationwide. The original Sweet Solution assortment worked to shed light on illegal child labor and modern slavery in the cocoa industry, an issue which is largely under communicated and known. Now, the former ‘look-alike’ chocolate bars are back on shelves, giving fans the opportunity to enjoy world-famous chocolate flavors without questioning where they came from or how they were made. 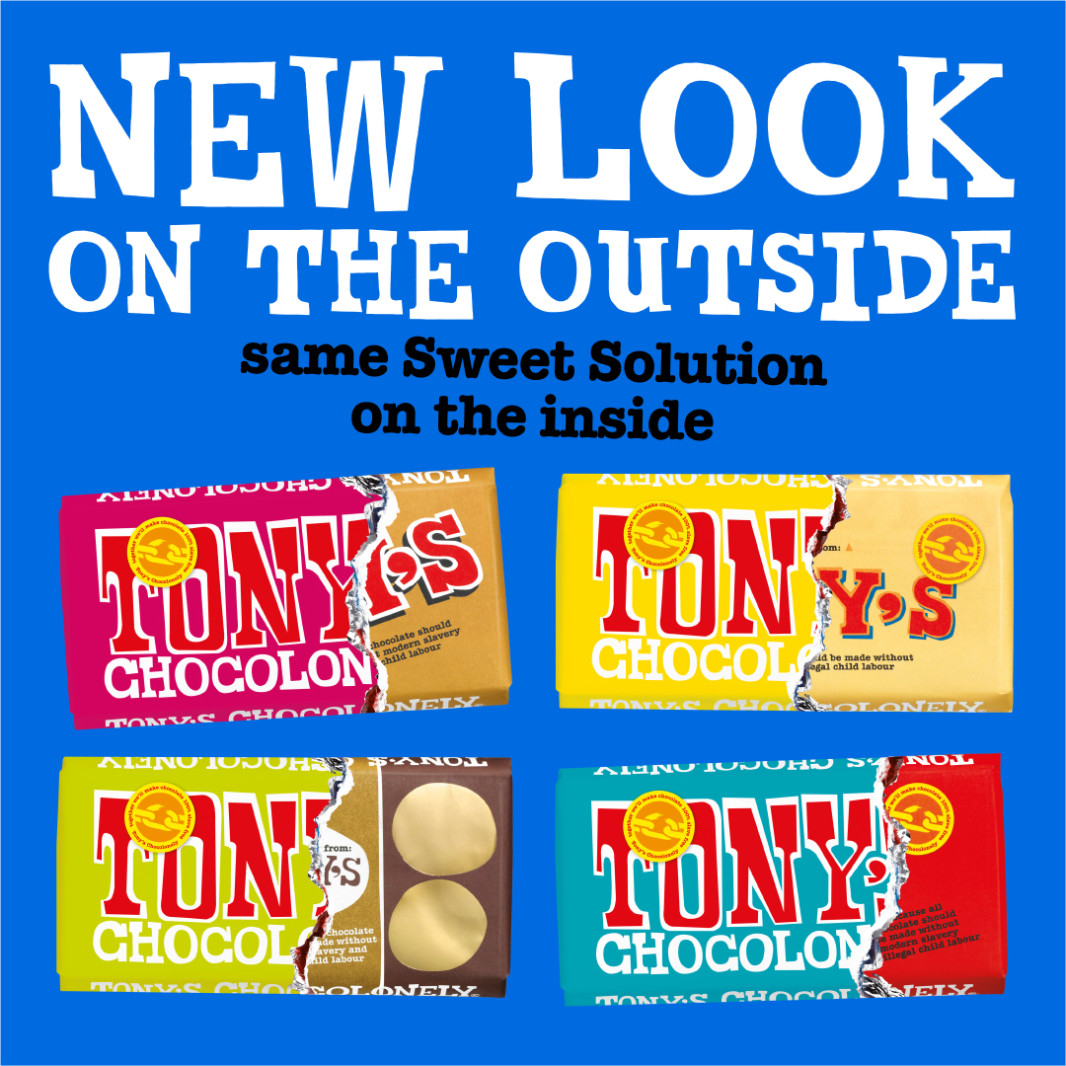 Tony's Chocolonely’s Sweet Solution bars, which were initially launched as limited-edition versions of notable chocolate bars made with Tony’s 5 Sourcing Principles for fairer chocolate, were an instant hit.

“When we saw how well our fans responded to these bars and their message, we knew we had to incorporate them into our classic rainbow,” explained Thecla Schaeffer, Chief Marketing Officer at Tony’s Chocolonely. “So, until our 5 Sourcing Principles become the norm in the industry, our Sweet Solution bars are here to stay.”

The four chocolate bars will now be wrapped in Tony’s Chocolonely’s signature colorful packing and sold at a price of $5.99 per bar. The new, permanent assortment of flavors includes:

Consumers can purchase the bars at Whole Foods’ stores across the nation beginning this month. For more information, please visit https://tonyschocolonely.com/us/en.

Tony’s Chocolonely is an impact company that makes chocolate. Putting social impact before profit — Tony's Chocolonely's vision is to make chocolate 100% slave free. Not just their own chocolate, but all chocolate worldwide.

The company was founded in 2005 by 3 journalists from the Dutch TV show ‘Keuringsdienst van Waarde’ after they discovered that the world’s largest chocolate manufacturers were buying cocoa from plantations that used child labor and modern slavery.

Since then, Tony’s Chocolonely has dedicated its efforts to raising awareness of and eliminating inequality in the chocolate industry. Tony’s Chocolonely leads by example, building direct, long-term relationships with cocoa farmers in Ghana and Côte d'Ivoire, paying them a higher price and working together to solve the underlying causes of modern slavery and child labour.

Tony’s Chocolonely wants to inspire the industry as a whole to make 100% slave free the norm in chocolate. They believe that being a better business should be the norm, not the exception. The brand has grown to become one of the market leaders in the Netherlands and its bars are now available almost worldwide, with offices in the Netherlands, USA, UK, Germany, Belgium and Sweden.

Tony's Chocolonely is B-Corp and Fairtrade-certified.