Amsterdam, October 20th 2022 – Tony's Chocolonely hopes to set a new industry standard by voluntarily committing to increasing the price they pay for their cocoa – by 82% in Côte d'Ivoire and 77% in Ghana – in line with inflation. The impact company is calling on other chocolate companies to also pay an even higher price in addition to the Fairtrade premium to help reduce the risk of cocoa farmers being pushed further into poverty, due to the cost-of-living crisis.

In Ghana and Côte d’Ivoire, where Tony's Chocolonely sources their cocoa, the price of daily essentials and cocoa farming costs are soaring. In Côte d'Ivoire, LICOP estimates the cost of living has gone up by 14% per person per day. While the price of fertiliser has increased over 50%, according to Africa Fertilizer Initiative. In Ghana, the situation is similar with COCOBOD confirming fertiliser costs have nearly tripled since 2019.

Tony's voluntary commitment to pay more follows the increased Living Income Reference Price (LIRP) set by Fairtrade as of October 1st, in light of rising fertiliser and living costs. Tony’s sees the LIRP as the first and crucial step with which all chocolate companies can address poverty and enable a decent livelihood for the people who farm their cocoa.

As part of Tony’s Open Chain, Ben & Jerry's, ALDI, Dutch supermarket chain Albert Heijn, as well as FMCG brands Jokolade, Vly Foods and The Flower Farm have all committed to pay cocoa farmers more for their cocoa. Tony’s Open Chain is an initiative that enables companies to join the fight against modern slavery and child labour in cocoa by becoming a 'Mission Ally' and following Tony's 5 Sourcing Principles – the company's tried and tested way of sourcing fairer chocolate.

Tony's Open Chain lead, Joke Aerts, says: “Cocoa farmers have the right to sustain a decent standard of living for all members of their households. But the industry has been slow to catch up. More and more big players agree that a living income should be the standard everywhere. But income diversification and productivity improvement projects fail to address the necessity of a living income. Paying the Living Income Reference Price for cocoa is a core driver for getting cocoa households out of poverty. That's why we are inviting all chocolate brands to join us in our mission, by joining Tony's Open Chain.”

Since 2013, Tony’s has consistently paid additional premiums to all its partner cocoa farmers to bridge the gap between the price farmers get for their cocoa and a price that enables a living income (Living Income Reference Price, or LIRP for short). Tony’s pays an additional premium on top of the Fairtrade premium, plus a $50 co-op fee. Paying a higher price is the first and crucial step to help eradicate the widespread issue of poverty – the root cause of child labour and modern slavery in the chocolate industry. Currently, the farmgate price is $1,225 in Ghana and $1,344 in Cote d’Ivoire, but the LIRP is at $2,120 in Ghana and $2,390 in Côte d’Ivoire.

As outlined in the below infographic, Tony's pays the Fairtrade premium, living income premium and co-op fee of $50. 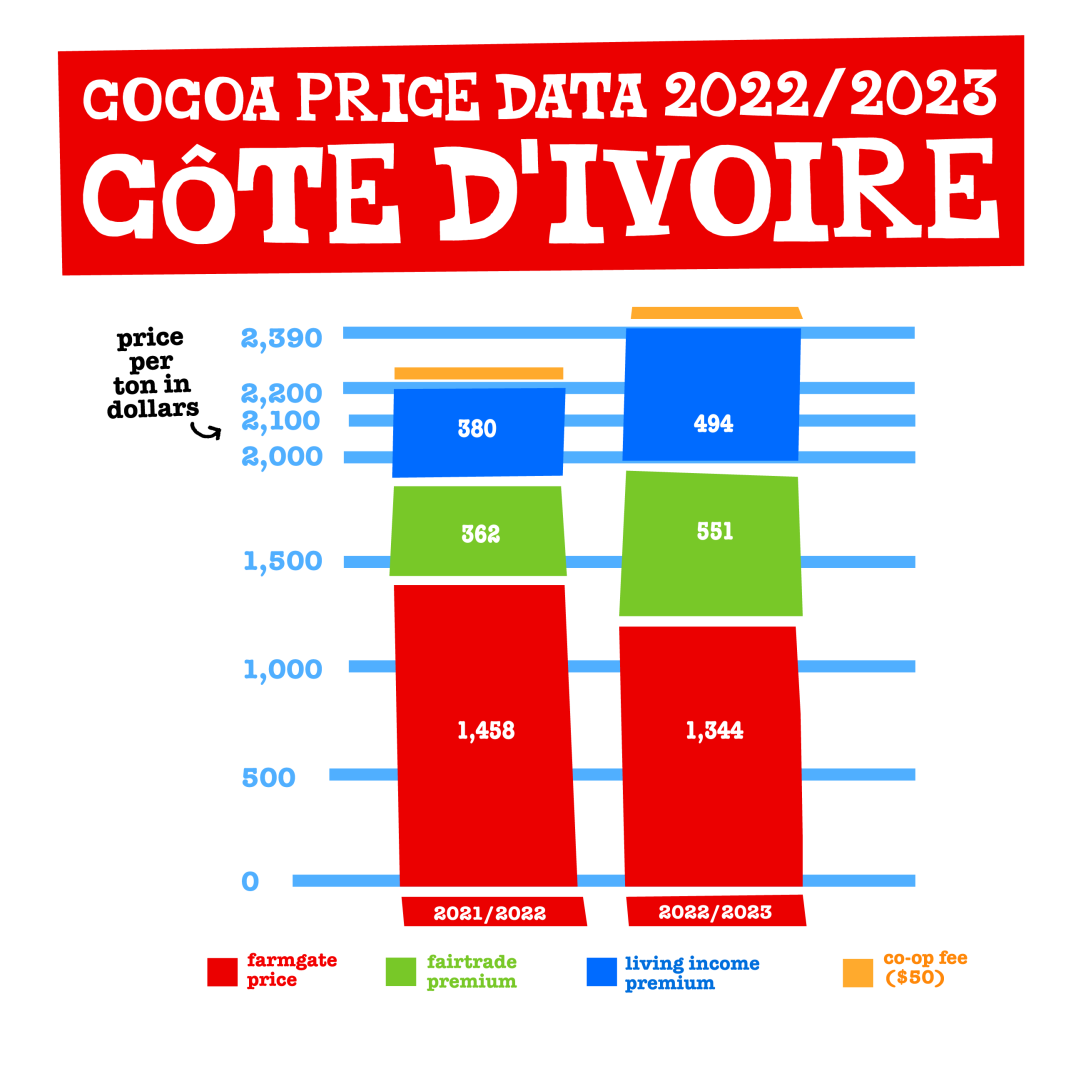 Inflation is increasing the risk of food insecurity and making access to healthcare and education more difficult, creating a heightened risk of exploitation.

Right now, the Global Slavery Index estimates that there are 30,000 cases of modern slavery in Ghana and Côte d’Ivoire, with the 2020 NORC Report stating that 1 in 2 children in cocoa-growing households in these markets work under illegal circumstances.

According to the 2020 Cocoa Barometer, poverty also leads to other drastic consequences, such as widespread deforestation in West Africa. This is further accelerating the effects of the climate crisis, which – according to a recent open letter by Fairtrade farmers to world leaders – is already felt by farmers of low-income countries such as Ghana and Côte d’Ivoire.

Tony’s Chocolonely is an impact company that makes chocolate. Putting social impact before profit — Tony's Chocolonely's vision is to make chocolate 100% slave free. Not just their own chocolate, but all chocolate worldwide.

The company was founded in 2005 by 3 journalists from the Dutch TV show ‘Keuringsdienst van Waarde’ after they discovered that the world’s largest chocolate manufacturers were buying cocoa from plantations that used child labor and modern slavery.

Since then, Tony’s Chocolonely has dedicated its efforts to raising awareness of and eliminating inequality in the chocolate industry. Tony’s Chocolonely leads by example, building direct, long-term relationships with cocoa farmers in Ghana and Côte d'Ivoire, paying them a higher price and working together to solve the underlying causes of modern slavery and child labour.

Tony’s Chocolonely wants to inspire the industry as a whole to make 100% slave free the norm in chocolate. They believe that being a better business should be the norm, not the exception. The brand has grown to become one of the market leaders in the Netherlands and its bars are now available almost worldwide, with offices in the Netherlands, USA, UK, Germany, Belgium and Sweden.

Tony's Chocolonely is a B -Corp and Fairtrade-certified.