Amsterdam, 23 June 2021 – Ghanaian filmmaker and poet David Boanuh got free rein from Tony’s Chocolonely to produce a documentary film offering a uniquely West African view of the chocolate industry and the lives of Ghanaian cocoa farmers. ‘Golden Seeds’ combines interviews with experts, farmers and their families, with glimpses of days in the lives of the cocoa farming communities that form the industry’s bedrock. The project is the second collaboration between visionary creative Boanuh and Tony’s Chocolonely –the company on a mission to end illegal child labor and modern slavery in the chocolate supply chain.​​​​​​​ 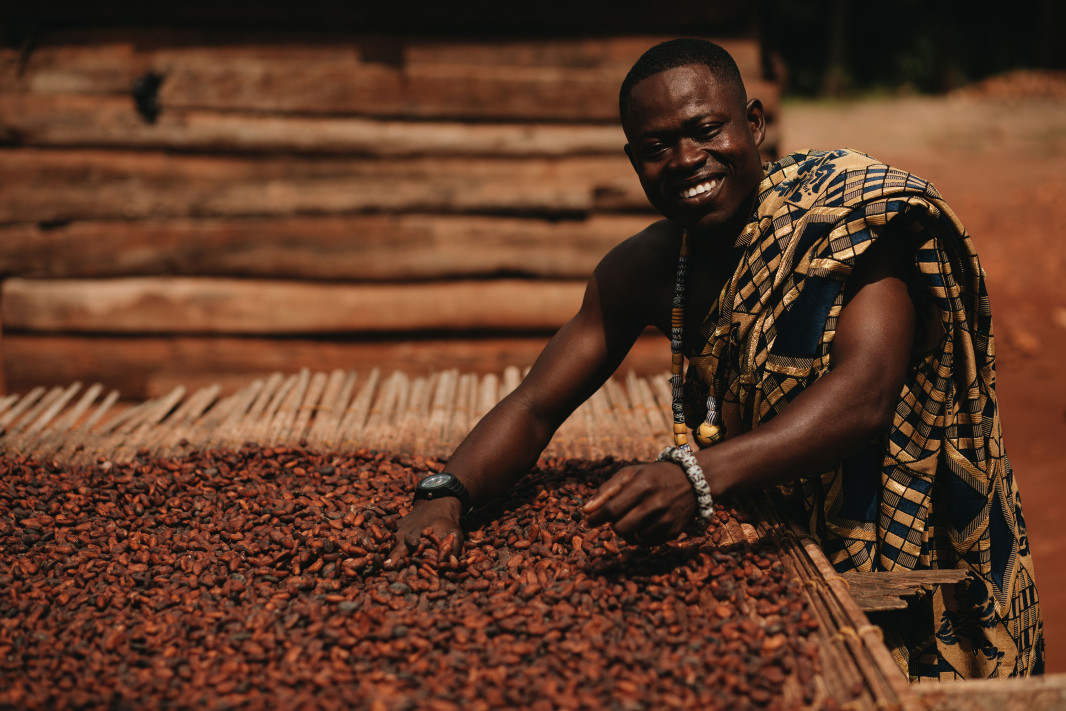 Unlike familiar media narratives that frame West African life through a charitable or sympathetic lens, Boanuh’s documentary offers a fresh, if unexpected, take. In ‘Golden Seeds’ the cocoa industry constitutes both a springboard for families into education and other career paths, as well as a world controlled by labor groups and exploitative chocolate companies. It’s a complex story, and it’s one that’s rarely been told from this perspective.

“Filmmaking is a tool of expression, and how we choose to use this tool can be very powerful,” Boanuh says. “We've seen journalists, news channels and filmmakers tell a one-sided story about us. With this same tool, I've chosen to counter that one-sided story with the hope of creating a more dignifying world from our own perspective.” This is the intention behind ‘Golden Seeds’. The doc consists of four chapters that introduce the cocoa industry in Ghana, then frame the hopes, the reality and the vision of the people at its heart. Candid interviews and striking photography hammer home just how complex a role the profession plays for many Ghanaians.

Boanuh’s production company, Beautiful Stories Studios, has collaborated with big names like Beyoncé and big brands like Apple, as well as with Tony’s on their 2018 ‘Reframed!’ project. Beautiful Stories Studios sets out to “inspire Africans on the continent and in the diaspora to be proud of their heritage, history and culture.” And with its global reach, the company positions itself to right the wrongs of media representation shaped by hundreds of years of colonialism.

Tony’s Chocolonely Content Producer Diara Lô, who began her career in the company’s Impact team, knows that “the work of changing systems from the inside begins by making room for multiple perspectives first. And this is definitely true at Tony’s.” Following the global BLM protests of summer 2020, more balanced representation in storytelling became an even bigger priority at Tony’s, inspiring an emphasis on underrepresented points of view. As Boanuh puts it, “this collaboration is born of a need for diversity in representation. Our vision to create Beautiful Stories of Africa, coupled with Tony’s mission to create a more equal supply chain, gave birth to ‘Golden Seeds’.” And this documentary is just the beginning..

Tony’s Chocolonely is a B-Corp, Fairtrade-certified chocolate-maker that puts social impact before profit – going beyond certifications to make chocolate 100% slave-free. Not just their own chocolate, but all chocolate worldwide.

The company was founded in 2005 by three journalists from the Dutch TV show ‘Keuringsdienst van Waarde’ after they discovered that the world’s largest chocolate manufacturers were buying cocoa from plantations that used illegal child labor and modern slavery.

Since then, Tony’s Chocolonely has dedicated its efforts to raising awareness of and eliminating inequality in the chocolate industry. Tony’s Chocolonely leads by example, building direct long-term relationships with cocoa farmers in Ghana and Ivory Coast, paying them a higher price and working together to solve the underlying causes of modern slavery.

Tony’s Chocolonely wants to inspire the industry as a whole to make 100% slave-free the norm in chocolate. The brand has grown to become the market leader in the Netherlands and its bars are now available almost worldwide, with offices in the Netherlands, USA, UK and Germany (DACH).